The fashion exhibition reframing the power of bootlegging

Bootlegging has historically been slung firmly at the lowly end of the fashion spectrum. Whether on the playground or in a bustling market, fake designer gear was something people sneered at, and often unwittingly betrayed signs of income and class.

There are exceptions to every rule, though. The best known bootlegger is undoubtedly Dapper Dan, the Harlem designer who clothed a breadth of hip-hop stars in the 80s, and later attained cult status during the 2010s. He famously ripped logos from high fashion labels such as Louis Vuitton, Fendi and Gucci, coming full circle with the latter when creative director Alessandro Michele referenced a Dapper Dan rip in a collection. The two went onto work together on a joint Gucci-Dapper Dan menswear collection launched in 2018, before Dapper Dan opened a store in his Harlem home turf in partnership with Gucci.

Dapper Dan is just one figure of broader bootleg culture, which seems to be enjoying a recent resurgence among fashion communities openly sporting fakes. Yet, as shown by Anastasiia Fedorova, writer and curator of a new exhibition at London College of Fashion’s Fashion Space Gallery, bootlegging has also been adopted by a generation of contemporary creatives as a technique for interrogating systems and structures in society.

The exhibition inevitably features references to Dapper Dan, however, there’s a firm focus on the present-day in the show, which kicks off with a range of Instagram AR filters that allow users to adorn their faces with famous brand logos.

Some works on display position bootlegging in response to environmental issues, whether Ancuta Sarca’s upcycled Nike trainers-turned-kitten heels, or May Hands’ clay sculptures, which are modelled on Louis Vuitton bags as a comment on overconsumption. It also features pieces by clothing label Hypepeace (no doubt a riff on Hypebeasts) which has referenced the likes of Palace, Comme des Garçons and Vetements as part of its initiative to raise awareness of social and geopolitical issues.

Bootlegging has also been adopted by artists seeking to involve communities in contexts historically outside of these brands’ target audiences, according to Akinola Davies Jr, whose video project Boot/Leg features in the show. “It’s about the women on Kingsland Road in knock-off Chanel hijabs, and the rudeboys with luxury wallets in their pockets,” he said. Elsewhere, Hassan Kurbanbaev’s photo series Logomania interrogates how Western symbols figure in his homeland Uzbekistan’s search for its identity. 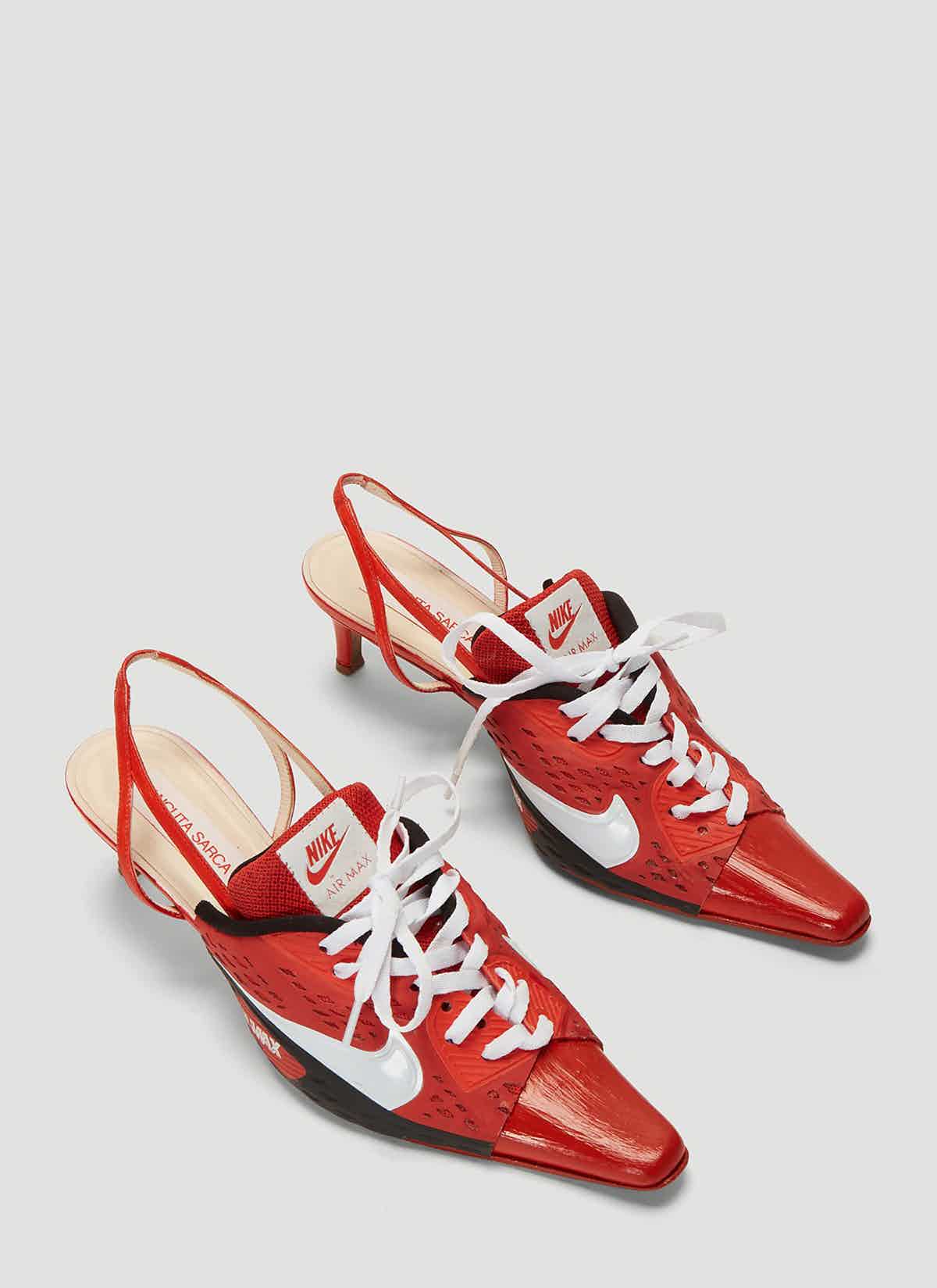 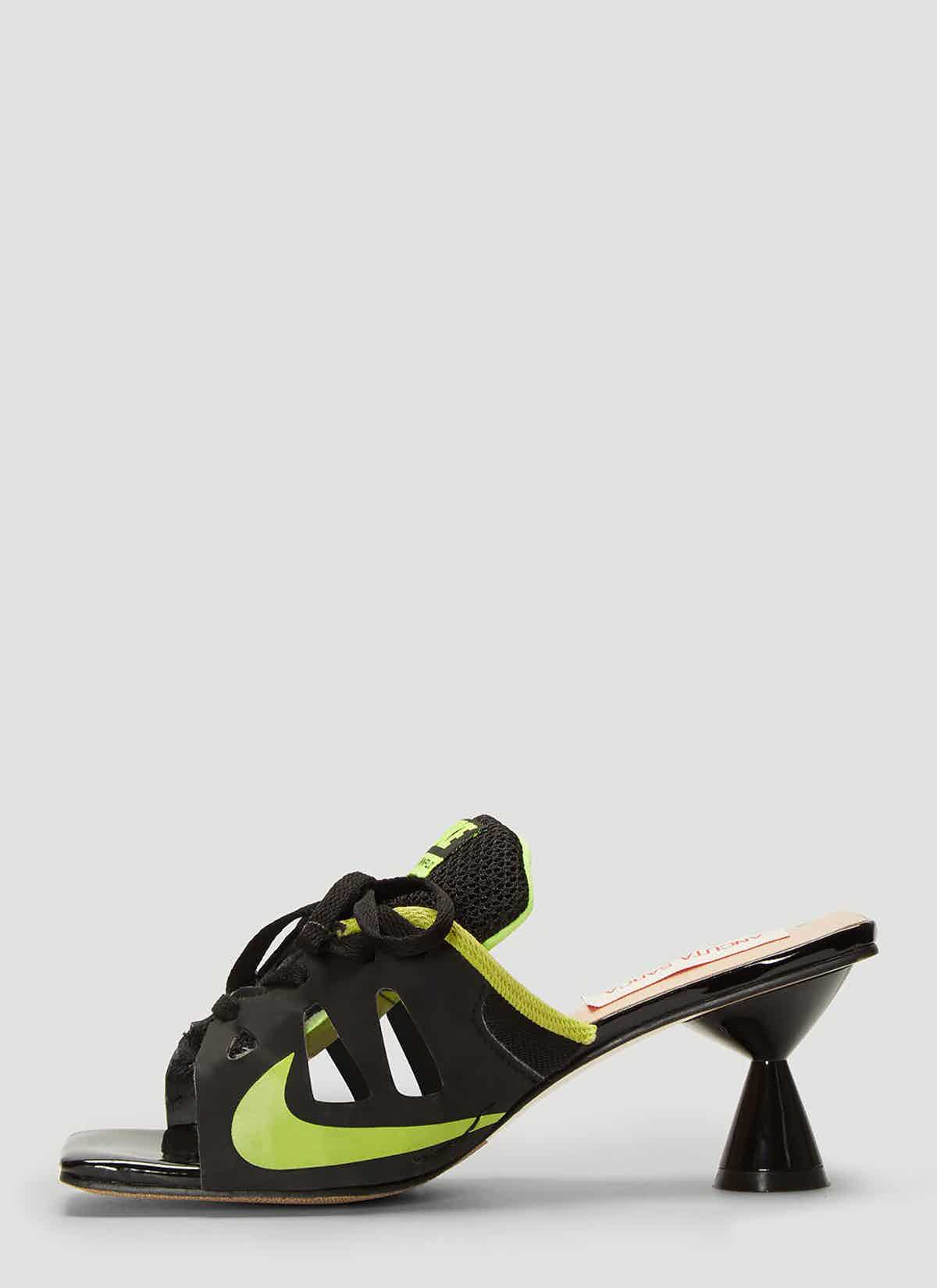 Perhaps most interesting are the works that show how bootlegs can go beyond the logos and slogans of well-known fashion brands. Designs by London-based studio Sports Banger demonstrate that any recognisable symbol is up for grabs – even those that aren’t coveted luxury brands but are firmly in the public domain, whether the NHS or tabloids. “Some said my NHS Nike T-shirt was a comment on the commercialisation of the NHS. NHS is free. NHS with a Nike tick is £19.99. Read it however you want,” creator Jonny Banger said in the exhibition guide.

“Luxury brands and logos have always been the ultimate symbol of status in fashion, but as long as the real items have existed, so have the fakes,” explained Fedorova in a statement. “My first memories of fashion were knock-offs – Versace jeans and Gucci belts commonly sold at markets in 1990s Russia. Even though I had no idea what these brands were, I could feel the power they had and the aspiration they represented.

“The duality of real and fake has always fascinated me and through years of working in the fashion industry as a writer, I became more and more interested in bootleg as a subversive creative practice,” she adds. “This exhibition will explore how the culture has become more than just imitation – forming an artistic language which is incredibly relevant for the 21st century.”

The Real Thing is on at Fashion Space Gallery, London until 25 April; fashionspacegallery.com

The post The fashion exhibition reframing the power of bootlegging appeared first on Creative Review.